Does Jojoba Oil Work as a Natural DHT Blocker?

All, Supplements for Hair Growth | 0 |

Jojoba oil (pronounced ho-ho-buh oil) has its origins as a Native American cure-all, used for centuries as a remedy for skin conditions ranging from acne and psoriasis to wound care. Its unique properties make it very similar to human skin oils, so it absorbs quickly. While it’s an amazing oil for many uses, the question is how well it can block the hair growth inhibitor, dihydrotestosterone (DHT). If you are suffering from the most common cause of hair loss, androgenetic alopecia (pattern baldness), DHT is the one to beat. As DHT binds to hair follicles on your scalp, it miniaturizes the follicles. This makes hair thinner, and shortens the hair growth phase, ultimately resulting in hair loss. Some believe that jojoba oil can block DHT from binding to hair follicles and not only prevent hair loss. But as I’ll explain in more detail below, that isn’t exactly the case.

What is jojoba oil?

Jojoba oil is derived from the Jojoba shrub which is Native to the American South West. It is now commonly cultivated in similar climates in North Africa and South America. In the 1950’s jojoba oil found its use in cosmetics since its properties mimic the long chain wax esters found in human skin oils called sebum. Jojoba oil is actually more of a wax than an oil as it is extremely shelf stable in a variety of temperatures. Because it is difficult to cultivate, Jojoba oil is produced in small batches and can be more expensive than other oils. However, its long shelf life and similarity to naturally occurring skin oils adds value.

Why jojoba oil may block DHT

The argument for jojoba oil’s hair loss prevention powers relies on the idea that the oil may inhibit the production of Alpha-5 reductase. This enzyme turns testosterone into DHT. When DHT binds to hair follicles, your body’s autoimmune response causes inflammation. The inflammation is what causes the follicles to stop working and the hair to stop growing. The believers claim that jojoba oil can reduce inflammation enough to stop follicles from miniaturizing.

Recent studies on jojoba oil (called Jojoba Liquid Wax in the study) found significant reduction in inflammation. That said, no where on the internet have I found a convincing scientific study concluding that jojoba directly impedes hair loss. Interestingly, I did find some studies proving that jojoba oil can have scientifically significant effects on skin aging and wound healing, and it can also help topical drugs absorb into the skin. This ability to act as a carrier for other medications, or indeed other essential oils effective against hair loss, makes it a logical vehicle for things that do block DHT and promote hair growth.

Studies on the effect of pairing essential oils with jojoba oil to inspire hair growth have promising results. Using an essential oil to block DHT on its own can cause irritation but mix it with an oil like jojoba and you have a balanced  serum that will aid absorption. To be clear, for many of these treatments, it may not directly block DHT, but rather undermine damage done by DHT, allowing growth and promoting scalp health.

How to use jojoba oil with other essential oils

While you can certainly go the quicker route of finding a shampoo that contains the right blend of essential oils for hair growth, for best results you may want to mix up your own concoction so you know exactly what you’re putting on your scalp. Here’s a quick guide for how to do it:

Jojoba is rich in nutrients that may assist hair growth

While it doesn’t block DHT, jojoba oil contains a variety of nutrients and antioxidants. These can help combat environmental (non-genetic) causes of hair loss and promote scalp health even for androgenetic alopecia or pattern baldness. Jojoba oil is chock full of vitamin E which helps cells regenerate faster and can even thicken hair growth. It is also rich in Vitamin B-Complex which can help stabilize hormones and prevents damage to skin cells. It also has disease resistant, anti-fungal properties which can prevent inflammation, potentially minimizing DHT’s damage to the follicle. As the ultimate moisturizer with its similar composition to  human oils, it can combat hair loss caused by extreme scalp dryness or psoriasis. 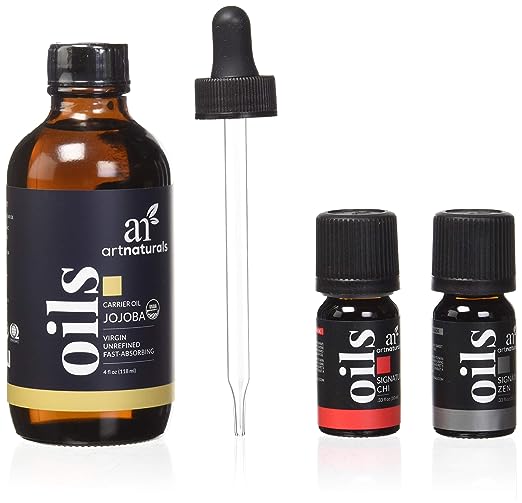 Not all jojoba oils are created equal and the quality of the product can change how effective it is. When you’re shopping around look for an organic oil that is unrefined and cold pressed. This will guarantee that you’re getting an unprocessed oil produced without heat or chemicals which could damage its efficacy. Jojoba oil should always be packaged in a tinted glass bottle (you’ll often see it in brown or blue glass). This is because UV rays can harm the chemical structure of the oil, making its properties less effective.

Here are three of the best reviewed oils on Amazon:

Jojoba oil is an excellent part of a holistic hair health routine to assist other essential oils in fighting hair loss. While it doesn’t block DHT, it is a powerful ingredient to aid absorption of hair-promoting oils. For the next step in your daily routine, check out our article on what to look for in hair growth supplements to pick the best one.